From my bedroom windows, I look up at the rocky wall of the Santa Ynez Mountains. The mountains rise twice as high as the Berkeley Hills, so much higher than I’m used to that I’m always startled when I see them. While the Berkeley Hills are dense with houses and green with planted trees, the Santa Ynez are mostly bare stony ramparts with thin patches of gray-green chaparral.

The only way to penetrate the mountains is through the narrow canyons carved out over time by running water. Even then, the going is rough requiring boulder hopping and at times squeezing through almost impenetrable thickets.

The mountains do have their gentler moments when the chaparral blooms briefly white in February and then pale blue in April. Sometimes in the winter the rocky face is laced with waterfalls which disappear in a day.

Late in the day when the low sun slants across the mountain face, shadows fill the canyons and the mountains look soft and approachable. At sunset, the mountains have their finest moment when the alpenglow suffuses the peaks with orange as if the mountains were being heated from within.

The rest of the time, the south-facing mountains, under the unrelenting sun, look harsh and forbidding. For relief, my eyes invariably trace the high ridge where a broken line of green conifers look like miniature cones from the distance. I learned that they are the drought-tolerant Coulter Pines which produce monster cones weighing up to eight pounds (maybe the largest in the world) while hanging on to their anchorage in such an inhospitable place.

Since coming to Santa Barbara almost 9 months ago, I have been eager to see them up close. My grandson was game for the trip, so last week on a bright sunny morning we drove up San Marcos Pass (called route 154 on the road map).

In ten minutes we were at the right turn to East Camino Cielo. The narrow, but paved road, passes first through a dense, shady grove of madrone and tanoak trees like the groves I had last seen at Mount Tamalpais, in Marin County. I learned that this was indeed the southern-most outpost for these species.

And could those trees be Big-coned Spruce, growing dark and ragged on that distant, steep north-facing slope? If so, this may be the northern limits for this tree, so familiar to those who frequent the mountains of southern California.

Closer at hand were other surprises. What’s this? A small cottonwood with shining leaves vibrating in the breeze?. Cottonwoods belong near water. What is it doing in these sere mountains. Maybe the crease where it was growing is a moist seep hidden from view.

A few plants are still blooming – the golden-petalled monkey flower, the red blooms of the hummingbird sage. Manzanitas which had bloomed in late winter now bear the round green fruits whose Spanish name means little apples.

And more surprises, sword ferns in the shadiest, most protected places. Scattered about are young big-leaved maples, another moisture lover, which bring a touch of gold to the fall landscape. 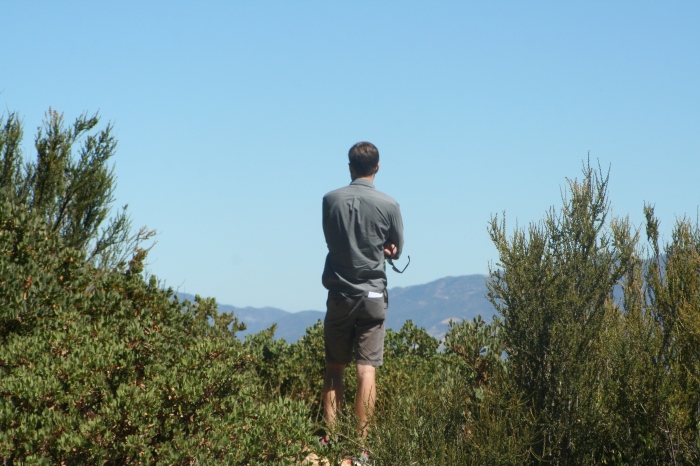 This transverse mountain range running east to west contrary to most of the coastal mountains, is truly a “Hadrian’s Wall” a kind of “don’t cross” line separating certain Northern California flora from Southern California flora. Those plants requiring more moisture can make it on the lee-side of the ridge where fog drip and heavier rainfall meet their needs.

Absorbed as I am by my immediate surroundings, I remember to look up to take in the superlative views – north to the higher inland ranges like the San Raphael’s and the south over the Channel, half-lost in the summer haze. I could just make out the slumberous profile of Santa Cruz Island on the horizon. Most arresting of all was the view down into the drainage of the Santa Ynez River where steeply-sloping hills are so dry and thin-soiled that almost nothing can grow there. I wonder if even abundant winter rains could touch them with green.

The air was both fresh and still, the silence profound, with only a calling wrentit to disturb the silence. How divine it would be to camp here, to see the wheeling constellations and to watch a sunrise. But the nearest campground is some miles away down along Paradise Road which parallels the river, but with none of vistas offered by this highest ridge of the Santa Ynez Mountains.

I am thinking of my father as a boy, in the framed, black and white photograph of him and his dad which hangs in my daughter’s office. He is a lad, perhaps twelve years old, and like his father holds a rifle at his side. Wearing a slouch hat with his trousers tucked into his high laced boots, he looks utterly happy to be out on a trail in these same mountains. A boy and his dad with their guns. I neglected to ask him before he died whether he sometimes saw condors. In the early 1900s when the photograph was taken, they would have been riding the thermals over the wilderness back country.

Half of me still lives in my memories of Northern California where the hills and mountains are so different. Instead of sharp, irregular profiles against the sky with their “bones” revealed, “my” hills and mountains are curvaceous, voluptuous, plump, and most often further softened by a covering of grass. Where a hill curves inward, toward its neighbor, the seams are filled with dark green live oaks and bays.

My daughter, when visiting Berkeley, would always mention what she saw as the cool, blue light and rumble of the cities below. I often felt caught between her love of Santa Barbara, and my father’s preference for “the brisk, invigorating Bay breezes” which seemed to energize him. He was not a fan of laid-back Santa Barbara and its soft, silken air. He rarely returned, and I sensed always with reluctance. I sometimes wonder what he would think, knowing that his fellow, nature-loving daughter had forsaken the vigor of the Bay Area, for this somnolent place.

Back in Santa Barbara in time for lunch, it required effort to reorient myself after only two compressed hours in such a high, wild place. I plan on returning often, heartened by how close I am to wilderness.