This is one of the noteworthy days of the year, the fall equinox and the first day of fall. Like the spring equinox six months from now, day and night are roughly equal in length.  The Bewick’s Wren is singing a more joyous song and the Oak Titmouse sings a combination of their spring halleluiahs with their raspy call notes.  Nothing will come of it, of course, and the days will continue to grow shorter by two minutes a day until we are jolted by darkness falling by 7 PM.

In Santa Barbara on the south coast, a 100 miles west northwest of Los Angeles, fall doesn’t really show up until October, when the California grapevine turns red on the fence and the winter birds show up in the coastal gardens.

Over the last few days, Bay Area birders are plucking my heart strings by reporting the first Golden-crowned Sparrows of the season. I remember those chilly mornings in the Berkeley Hills when I would walk up the street towards the pasture whistling their song. If they had arrived in the early morning hours after a long night’s flight, they answered me with one or two minor key notes.  I would yelp with joy and dance a quick jig.  When I returned home, I made an entry in my notebook, circling the date in red.

It would be a few more days before the little flocks worked their way into the neighborhood to settle into their winter territories. I wondered if these birds were the ones that had come last year and maybe several years before.  The good news was that they remained until mid or late April, developing the bright yellow crown, before departing for the far north.  During the winter you could count on them singing just before it started to rain.

As far as I know there are no golden crowns in this neighborhood or even in Oak Park.  They are most often reported in weedy fields in open areas like the upper Elings Park.

A single mature male has spent the summer feeding with several Song Sparrows in a clearing near Los Carneros Lake.  Apparently, it declined to join the others of its kind for the migration north in April. Was he damaged in some way or simply lacked the normal instinct, the irresistible urge to migrate?

Hearing the Western Tanagers on the move, I will start listening for our winter birds, though I know it’s probably too early.  I arrived at Samarkand as a reluctant migrant from Northern California at this time nine years ago.  It was during the lull between the seasons. I was disconsolate. I looked for one familiar bird. Finally, there it was — a California Towhee scratching in the leaves alongside the pathway.

Something did arrive early this year, a substantial rain but with hardly a sprinkle here.  Elsewhere, it was enough to signal the annual nuptial flight of the termites when some of these subterranean creatures grow a pair of gossamer wings for a day’s fling above ground in the bright air. The queen ascends high in the sky pursued by ardent males eager to mate with her.  Then as quickly as it began, it was all over and the termites resumed their lives in the dark with a pregnant queen, leaving behind a shimmering carpet of discarded wings.

I had assumed this early storm was like the ones to follow, moving down the coast from the north.  But the cause was Hurricane Kay, an extensive, well-organized storm which had originated off the coast of Baja California, slowly weakening as it moved north to bring varying amounts of rain.

Nature sent us a consolation prize though — a double rainbow which felt more like a gateway to grander things.

Nancy Keele lives in one of the cottages referred to as a Southview villa.  Unlike most residents at Samarkand who have either a balcony or a small patio, Nancy has both a small front yard and a rear garden which includes a handsome Canary Island Date Palm where she raises her Epiphyllums.

When I look out into my beautiful gardens, I can’t help but think of my mom, and her influences on my life. She gave me my first two Epiphyllums (“Epies”) and put me on my first pony. As I grew older, to help me develop talents, she agreed to take me horseback riding monthly if I practiced the piano daily.

As an adult I fell in love with the Epies; my collection numbering above 100 before my move to The Samarkand.

I fulfilled my dream of having a horse by owning a 13-acre ranch on San Marcos Pass where I bred, raised, and trained Arabian horses. I exhibited in many shows throughout California.

I was the Choral Music director at Santa Barbara Junior High, and at La Colina Junior High School, where I was also involved with Music Theatre productions.

My front walkway garden is lined with Epidendrums, Cymbidiums, and succulents. However, the Epiphyllum “stars” are in my back patio garden. In nature they grow in trees; I grow them in nursery pots. Blooming season is in the spring (March through June). 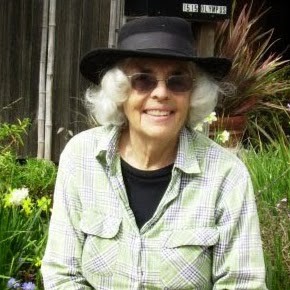