Ralph Hoffman begins the introduction to his wonderful bird book, “Birds of The Pacific States,” first published in 1927, with a paraphrase from one of Cicero’s orations extolling the delights of studying literature and how it enriches life.  Hoffman then paraphrasing further, applying Cicero’s words to the study of birds:

“It (the study of birds) develops keen observation in youth and is a resource in old age, even for the invalid if he can but have a porch or a window for a post of observation.  Birds become the companions of our work in the garden and of our walks…”

”If a parent wishes to give his children three gifts for the years to come, I should put next to a passion for truth and a sense of humor, love of beauty in any form.  Who will deny that birds are a conspicuous manifestation of beauty in nature?”

I keep next to me my copy of “Birds of the Pacific States” given to me by my parents in the 1930s.  I was smitten with birds, thanks to my Girl Scout troop and the work we did towards our bird badge.  From experienced teachers, we learned the birds of the garden, and, on a nearby lake, winter waterfowl.  It is no exaggeration to say that my life was transformed forever.

And it may have been inevitable that in my old age I moved from Berkeley to Santa Barbara, Hoffman’s home where he wrote my treasured book.

His book has a way of truly experiencing a bird rather than simply identifying it.  A simple system of identifying a bird alone would have to wait for Roger Tory Peterson’s Field Guide to Western Birds, published first in 1941 (also given to me by my parents) where the salient features of a bird were indicated by arrows.  Further description was minimal, stating only that, in the case of a Brown Towhee: “A dull gray-brown with a moderately long tail; suggests a very plain overgrown sparrow.”

But read what Hoffman has to say about the Brown (now the renamed California) Towhee, a common bird found in the countryside and in most of our gardens:

“Can even a bird-lover become enthusiastic over a Brown Towhee – a plain brown bird that hops stolidly in and out of brush heaps…with no bright colors, no attractive song and no tricks or manners of especial interest? The bird is a rustic with the stolidity of the peasant and apparently lives its entire life near the spot where it was born.”

Now there is the “essence” of the towhee!

And how grateful I was that within a week of arriving at my new home, I discovered a towhee scratching in the dry leaves.

Inserted into the pages of my copy of Hoffman’s book is an article from “Natural History” magazine written by Harold Swanton in 1982 titled “Ralph Hoffman: Unsung Guide to the Birds” subtitled “Early bird guides concentrated on birds in the hand: a New England schoolmaster produced the first for birds in the bush.”

The earlier publication in 1904 of Hoffman’s a “Guide to the Birds of New England and Eastern New York” was considered to be the first true bird guide.

After teaching Latin is several private schools in the east, Hoffman came west in 1919 to again teach Latin at the Cate School for Boys in Santa Barbara.  As a graduate of Harvard and the son of a distinguished Latin and Greek scholar, Ferdinand Hoffman, who ran a boy’s school in the East, Hoffman came by the classics naturally.

For the next six years, Hoffman lived in nearby Carpinteria where he had a clear view of the Channel Islands. The islands would draw him across the channel often, first to study birds and later plants. The northern-most island, San Miguel, would be where he met his untimely death.

The Pacific Coast was a new territory for Hoffman and he began almost immediately doing the research which would lead to the publication eight years later of the “Birds of the Pacific States.”

Swanton writes that “Hoffman had no formal training in ornithology or botany, and although he became an expert in both fields, he retained his amateur status.  He brought an amateur’s excitement and joy to his work, reflected in every line he wrote.”

Hoffman left teaching only when he was given the job as director of the Santa Barbara Museum of Natural History, an ideal job for a man who loved both teaching and the study of natural history. 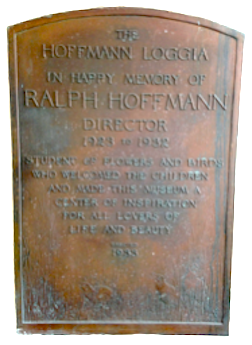 After the publication of his bird book, Hoffman turned his attention to botany. He took the opportunity on July 21, 1932 to go to San Miguel Island to pursue his study of buckwheat. When he failed to return to the group, after an eight-hour search in heavy fog, his crumpled body was found at the base of an almost vertical cliff. His broken trowel was found next to him. He evidently tried to use his trowel for support.

He is remembered especially at the Museum where a plaque memorializes him.  Though now found only through specialty booksellers, “Birds of the Pacific States”  remained in print for 50 years.

Joan Lentz, a Santa Barbara birder and author, agrees that Hoffman’s “Birds of the Pacific States” is one of the finest field guides every written.

For every lover of birds and nature, his book is an essential part of one’s library.